Shooting a Vogue cover sounds like a glamorous job but what happened to these girls was more horror show than haute couture! In a weird twist, #4 is almost the exact same thing that happened in one of the scenes in my novel, The Tokyo Cover Girls! Either that is some weird coincidence or I’m starting to develop the power to make my words come alive all Goosebumps The Movie like…

This Playboy model (and mother of one) died from a stroke at the age of 34. Though it has not yet been confirmed, her condition appears to have been caused by injuries she suffered after taking a nasty fall during a photoshoot days earlier.

Taiwanese model (and also a mother of one) Olivia Ku died during an underwater mermaid-themed photo shoot in her home country. According to witnesses her breathing apparatus had been removed to complete the Arial aesthetic when Ku suffered an asthmatic attack. The attack led to her eventual death at a hospital shortly after.

American model Jess Adams was struck by a four-propellor drone that was being used to photograph her during a beach shoot in Malibu. Though her injuries weren’t fatal (thank goodness), she did wind up with a major black eye from the incident.

Top Model Coco Rocha nearly fell to her death while shooting the August 2016 edition of Harper’s Bazaar Taiwan. In order to get the perfect Taipei skyline shot, Rocha agreed to perch on a tiny outcropping atop a skyscraper–and in a pair of wobbly pink stilettos! Talk about putting the ‘haute’ in ‘haute couture.’

Remember Melody from the Archie comics? The blonde who cause traffic accident mayhem whenever she walked down the street. Meet real life Melody: Ana Pavel, whose gorgeous looks (didn’t help that her top was off) caused a cyclist to crash his bike during a photo shoot in Dublin. Maybe next time they should stick to the studio. 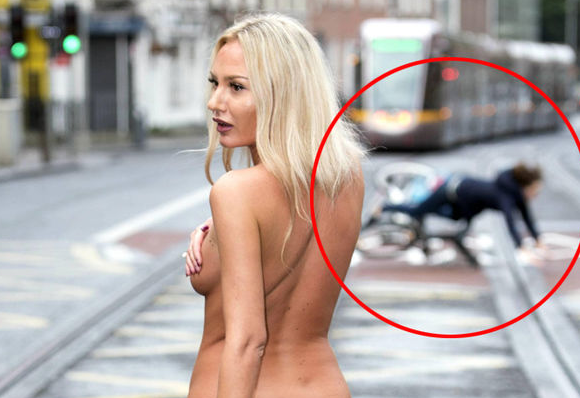